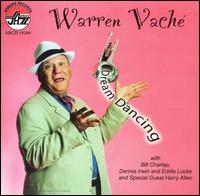 Review: As the first plunger-muted tones of Close Your Eyes meet the soft shoe of Eddie Locke’s brushwork, you know that Warren Vache is on an impassioned mission to claim his rightful position at the helm of Jazz trumpet. Unfairly branded as strictly a “Swing” or “Trad” player, Mr. Vache has coalesced his influences into a unique, imitable style; his solos unravel in long skeins of cascading ideas, owing as much to the legacy of Fats Navarro and Clifford Brown as to the trumpet heroes of the Swing Era. Warren’s melodically complete improvisations, coupled with his singing, burnished tone allow any song he chooses to play a metamorphosis into a unique jazz experience. Bill Charlap on piano provides the perfect foil for Mr. Vache’s creations - his solos and accompaniment can be spare, complex, obtuse, yet always swinging as he seems to be able to summon the entire history of Jazz piano at his whim. Dennis Irwin on bass and the aforementioned Eddie Locke on drums not only provide a rock solid foundation, but are eager participants in the creative proceedings. Harry Allen’s “Stan Getz meets Ben Webster” tenor sax adds a luxurious counterpoint to Mr. Vache’s creations on 4 tracks, most notably Lover, Come Back to Me and What’s New?.

The modal joys of Close Your Eyes resolve into the understated beauty of Too Late Now. Quasimodo (Bird’s line on Embraceable You) is taken “medium up” and proves that great players don’t have rely on hackneyed phrases to “be-bop”. Lover, Come Back to Me is “up” and swung hard by all hands. A relaxed Warren expounds upon the joys of Dream Dancing along with a “Websterish” Harry Allen and some sublime Charlap. (Note the Hi-Fly motif that gets bandied about the 4’s and the coda). Blue Lou features a Harmon-muted Warren burning up the changes, a nicely plucked bass solo by Dennis Irwin and fine brushwork by Eddie Locke.

Some Other Time is one of those deceptive melodies ala Johnny Mandel’s A Time for Love that pose an improvisational sand trap for players of lesser accomplishment than we are graced with here. Warren’s evocative reading of this piece showcases the beauty of his sound and his mastery of the Jazz ethos. Bill Charlap contributes a subtlety masterful solo of his own. You’re a Lucky Guy swings along brightly with Mr. Charlap keeping things “in Stride”. With muted cornet, Mr. Vache burns mightily on You’re All the World to Me which features some nice exchanges with Eddie Locke’s brushwork. What’s New? is taken at a slightly brighter tempo than has become the norm, allowing Harry Allen and Warren Vache to create this classic a new.

I’m Shooting High is a high octane outing for Warren’s muted cornet, abetted by Harry Allen’s tenacious tenor sax. Warren Vache’s whimsical crooning on Not Exactly Paris will bring fleeting, bittersweet memories of lost loves to even the most heart-hardened listener. Although revered among the trumpet playing fraternity and jazz fans throughout the world, Mr. Vache has never received the accolades due someone with his enormous talent. This recording should prove to both the uninitiated and the jazz “cogneziotti” alike that Warren Vache is a dominant voice in Jazz and truly a talent deserving wider recognition.