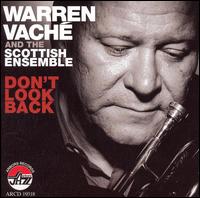 Cornetist Warren Vaché had more than 35 albums as a leader under his belt before he was finally able to realize his lifelong dream of making an album with a string ensemble. Don't Look Back was recorded in Glasgow with a 12-piece studio group called simply the Scottish Ensemble, and Vaché had the... [+] Continue

Cornetist Warren Vaché had more than 35 albums as a leader under his belt before he was finally able to realize his lifelong dream of making an album with a string ensemble. Don't Look Back was recorded in Glasgow with a 12-piece studio group called simply the Scottish Ensemble, and Vaché had the additional great fortune of securing the arranging skills of 87-year-old Bill Finegan, a legend who was essentially drawn out of retirement for this project. The deep experience of all concerned is showcased brilliantly on this album, which is basically an hour-long study in elaborate and gorgeously orchestrated melancholy. This would be called "make-out music" if it weren't all so richly and wonderfully sad -- it's more like breakup music for a couple who still loves each other and bears no ill will, but knows the relationship is doomed and is anxious to break it off gently and leave the happy memories intact. Vaché's tone is warm and heartbreakingly lovely throughout; the string arrangements are, unsurprisingly, richly detailed but never ostentatious. There are no uptempo numbers; from the hauntingly beautiful "It Was Written in the Stars," which opens the program, to the bittersweet title track that ends it, this album moves slowly and gracefully through various shades of lyrical blue, never stopping but never hurrying, either. This is perhaps not the best album to listen to if you're depressed already -- but if you're in the mood for something soft and sad, for mood music that rewards close attention, then you'd be hard pressed to find anything better than this. Very highly recommended. ~ Rick Anderson, All Music Guide

A veteran trumpeter with an extensive resume that includes stage, radio and television performances, Warren Vaché filled a void in his three-decade career with the recoding of Don’t Look Back. Having once stated that “Everybody really serious about jazz music dreams of making a recording with a string ensemble,” Vaché accomplishes this long-held desire by joining forces with the Scottish Ensemble, a twelve-piece virtuoso string group that once specialized in only baroque music. Playing against the backdrop of the strings, his trumpet and cornet convey a warm and pleasant mood associated with a classical-jazz atmosphere.

On six of the ten tunes on this album, Vaché leads the Scottish Ensemble, and his trumpet is the only other instrument accompanying the group. Preferring to limit the music in this manner, he employs a rhythm section on four other tracks: bassist Ronnie Rae, pianist John Rae and drummer Brian Kellock. Another important contributor to this project was guitarist James Chirillo, who provides various arrangements and wrote “Valse Prismatique.” The selections include lush standards like the Harold Arlen’s “It was Written in the Stars,” Hoagy Carmichael’s “April in My Heart,” Sammy Cahn’s “ I Fall in Love Too Easily” and an absolutely beautiful rendition of the David Raskin classic “My Love and I.”

Typical of classical-jazz music, Don’t Look Back quenches the thirst for that soft and gentle side of jazz that we all need a sip from sooner or later. Vaché interprets the selections on this relaxing, soul-searching and soothing jazz session with graceful accompaniment from his instrumental collaborators.

Visit Warren Vaché on the web.

Track listing: It Was Written in The Stars; My Mistress' Eye; Spring; My Love and I; Molly on The Shore; April in My Heart; Valse Prismatique; I Fall in Love Too Easily; Love is For The Very Young; On The Street Where You Live.