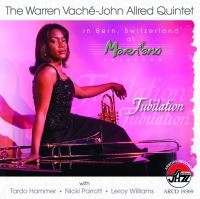 Arbors continues their extensive series of putting together top caliber veteran jazz musicians with crack rhythm sections and letting them loose with well recognizable songs from the Great American Songbook and other well known composers. It’s a recipe for success and Arbors seems to have a patent on the formula. After all it’s a fail-safe proposition for mainstream fans. It provides a sweetness with a sure fire chance for swing and occasional bop to reach an appreciative audience. With Jubilation, Arbors has met expectations with spades.

Keeping the front line to brass instruments is a winning combination here, as well as mixing two Horace Silver hard bop numbers - Song for My Father and Strollin’

This group can handle this mix with aplomb. Old Devil Moon jumps from the speakers swinging hard. The mix of cornet and trombone mix seamlessly before the solos kick in. Leroy Williams sets an assertive pace and Allred is right there with Leroy. The appreciative Swiss audience knows they are hearing top American talent and show their appreciation. The Gershwin chestnut, They Can’t Take That Away From Me, slows down the pace but Warren and John show their ballad chops with nice fills from pianist Tardo.

The horns on Song for My Father do justice to any of Horace Silver’s hard bop aggregations. Warren can blow with power, when needed and here he lets his warm assertive tone kick in. Allred, not to be outdone, has his moments here as well. It’s back to a gorgeous ballad on My One and Only Love, and Vache is centerpiece. Allred gets his time to take over on the subsequent, Change Partners taken as a bossa nova.

Strollin’ is more Horace Silver taken just right and Tardo Hammer shows he fits in with the front line with fills and shifting colors. Sweet Hunk O’ Trash has Vache and Parrott playing off each other as Parrott sings coquettishly in response to Warren’s bantering.

Jubilation from the pen of Junior Mance is sweet soul jazz, while Strike Up the Band is taken Dixieland style. Warren Vache ends our Swiss visit with a short vocal on We’ll Be Together Again. Kudos to Arbors and Vache/Allred Quintet.

TrackList: Old Devil Moon, They Can’t Take That Away From Me, Song for My Father, My One and Only Love, Change Partners, Strollin’, Sweet Hunk O’ Trash, Jubilation, Strike Up the Band, Caravan, We’ll Be Together Again

- Jeff Krow
- with Songbook classics - Old Devil Moon, They Can’t Take That Away From Me, Change Partners and Strike Up the Band.

The special rapport between cornet player Warren Vaché and trombonist John Allred, built on a friendship of more than 20 years, is evident in this hard-swinging live session recorded before an appreciative audience in December 2007 at Marians Jazzroom in Berne, Switzerland. They blend seamlessly - as on the unaccompanied two-chorous contrapuntal duet on "Strike Up The Band" - and solo with style and conviction.

Inspired by a crack rhythmn section which includes two of New York's finest in bebop, pianist Richard "Tardo" Hammer and drummer Leroy Williams, Vaché shows his admiration for trumpeters Blue Mitchell and Lee Morgan as his playing takes on boppish overtones on the two Horace Silver numbers, "Song For My Father" and "Strollin." Add bassist Nicki Parrott with her big sound and great time and it's no wonder Vaché would like to "keep the group together for the next 20 years." He may be a keeper of the swing flame but Vaché is comfortable in any musical environment.

The highlight: Vaché on "My One And Only Love" where his lovely melodic balladry shares the honours with a quiet interlude from Hammer. And don't miss his humorous asides with Parrott on "Sweet Hunk O' Trash."